Staple foods are those that are dominant in global production. There are over 50 000 edible plants in the world, but only 15 of those provide 90% of energy value worldwide. According to Food and Agriculture Organization, world agriculture produces by 17% more calories per person than it did thirty years ago. There is enough food to feed all the people on planet.

The rate of food waste per capita in European Union is 280 kilograms, 90 kilograms of which are wasted directly by consumers. Much of foods wasted in developed countries is produced in developing countries. If the consupmtion of foods in other countries was the same as in the Czech Republic, it would require 2.8 times larger area than that of the planet Earth (source – Glopolis). 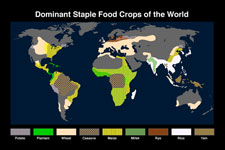 The data is based on UN, FAO and MDG reports.